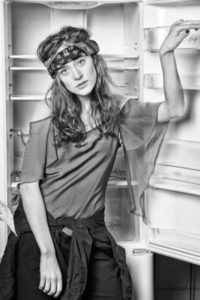 Incomprehensible eating habits are by no means the domain of hippies. However, I’ve been around a lot of hippies in my life. Australian hippies. South American hippies. Mexican hippies. Japanese hippies. English hippies. And regardless of the country I was in or the variety of hippie I was hanging out with, I just never learnt to love these foods.

1. Roadkill – A guy I know once told me he eats roadkill and his mates do too. It’s not that they can’t afford meat – they just don’t like to see a sentient being’s life go to waste. If it’s fresh roadkill, it can be eaten safely, they say.

I do believe the proverb ‘waste not, want not’ has been taken to extremes in this instance. You have to commend these hippies for having the guts to eat squashed guts though.

Note: This is not something exclusive to Maleny. If you Google ‘roadkill cuisine’, you’ll find it’s a thing all over the world. PS – I always feel sad when I pass roadkill. I’m just a little hesitant to pull over, scoop it up, take it home and cook it up with mashed potato and greens and feed it to the kids for dinner.

2. Cacao nibs – A very vegan, very hippie dude came to my birthday party a few years ago and gave me a large packet of cacao nibs and a massive spliff as a gift. No way would I touch that shit, not if you paid me. It’s awful and it makes you sick, but because it’s natural and earthy, people think it’s okay. If I’m going to be a bit naughty, I’d rather have the good stuff – chocolate. I don’t even know why cacao nibs are legal, they taste like dirt.

3. Lentils – I don’t get it when people rave about dhal, as if it were a fine pinot grigio. Dhal is basically slop. It’s okay if you don’t have teeth, but I really don’t understand the enthusiasm. Lentils and legumes are supposed to be good for us – unless you believe the paleo brigade, who believe they’re bad for us. It’s so hard to keep up with what’s healthy and what’s not these days (although I’m guessing a paleo fan would have to choose roadkill over lentils, just on principle). Anyway, while I’m not really a lover of the lentil, I don’t mind chickpeas in the form of hummus someone has already prepared, whacked in a container and delivered to my local supermarket.

4. Placenta – No, not polenta. Placenta. People say nothing prepares you for the shock of childbirth and seeing a human being emerge from your body. I believe nothing prepares you for the shock of seeing the placenta. It’s a big chunk of meat that looks like something from another planet, not unlike the thing that burst out of that guy’s stomach in the first Aliens movie. Some women aren’t too fussed on the fate of their placentas, preoccupied with their babies as they are. Others have plans for their placentas. Like, dinner plans.

I was that person once. I took my first placenta home with me in a white bucket with a lid and it took up half my freezer for about three years. I kept meaning to eat it, but I never got around to it. It’s thought that eating the placenta helps you regain your energy after childbirth, and I certainly could have done with that super-placenta energy. But every time I thought about cooking and eating a slab of meat from my own uterus, I was a bit grossed out. So I defrosted it, planted it in the garden and grew a Chinese happy plant on top. It was such a relief to have the freezer space back again.

5. Health cake – If I were the boss of Australia, I would outlaw health cake. Anyone caught baking tasteless, dry, gritty, crumbly, sugar-free, gluten-free cake would be sentenced to a year living with the rotund guy from Masterchef, whereupon they would be forced to learn how to make a REAL cake. Flour. Sugar. Butter. Eggs. Chocolate. Cake is not cake unless its sweet and fluffy and sends your dopamine levels soaring off the Richter. I know, I know, people have dietary requirements blah blah blah, so they are excused.

For everyone else, here’s the thing: cake is a sometimes treat. Once a year on your birthday, or for special occasions. On these special occasions, it’s okay to indulge in a piece of proper cake. Health cake, in my experience, is always a poor substitute. It’s sad and wrong. It’s like non-alcoholic beer or or low-fat milk or Spam or Deb potato. Some things in life are supposed to be good for you nutritionally, like avocado and apples. Some things exist for the purposes of promoting sheer happiness and to feed your soul. Like cake, chocolate and wine. Just have the real stuff – life’s too short for pretend treats.

6. Tofu – Does anyone still eat tofu? I lived on the stuff when I was vegan and vegetarian and I didn’t mind it. But then there was a tofu backlash and people went all anti-soy on our arses. They started saying it interferes with fertility and gives guys moobs. It used to be rare to meet a meat-eating hippie, but then naturopaths started telling everyone they needed to eat meat and bone broth, and stop eating pasta and rice and tofu. Then Pete Evans came along and got people obsessed with being paleo and turned it into a religion full of people with glassy, emaciated stares. So now we have meat-eating hippies, versus vegetarian hippies, versus vegan hippies, versus paleo hippies. Then there’s raw food hippies versus Ayurvedic cooked-food-only hippies.

Is there still a place for tofu in this confusing and contradictory array of diets? Maybe if you’re in Asia, but not in our house. I once tried to feed it to my youngest son and when I told him it was tofu, he thought I said ‘toe food’ and refused to eat it. I also tried to feed him dumplings and he thought I said ‘ducklings’ and refused to eat those too, and rightly so. But I digress. Eating tofu is like chewing on rubbery air and the jury is out as to whether it’s good for you or not, so toss that tofu before you grow moobs or your ovaries shrink.

7. Herbal tea – I’ve gone through my herbal tea phases, mainly when I was young and stupid. I dabbled, here and there, thinking the herbal stuff was where it was at. But I was fooling myself. I come from a long line of black tea drinkers – it’s in my DNA. There’s nothing like a good strong cuppa, the colour of mud. I am known to hover over someone who makes me a cup of tea to make sure they brew it long enough and don’t put too much milk in. If they get it wrong, I’ll tip it down the sink.

If I go longer than four hours without a cup of tea, I begin fantasising about it. I have never, in my life, fantasised about a cup of peppermint tea or had a major craving for a cup of chamomile. Have you? Just know, there are free helplines and support centres available if you need someone to talk to about it. They’ll get you off the bad stuff and onto the good stuff in no time.

Note: chai is a sacred hippie drink that deserves an entire blog post all to itself, which you’ll see in coming weeks.

What are your pet food peeves? What healthy foods do you hate? What naughty foods do you love? Tell me about it in the comments section below.

4 thoughts on “7 hippie foods I refuse to eat”