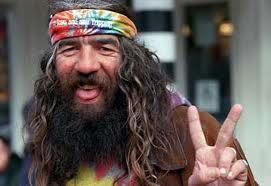 Not long after moving here, I went to a gathering at an old farm house.

It was a vegetarian barbecue, with lentil burgers cooking on a sheet of old metal, balanced on bricks over a fire.

We ate delicious tabbouleh made with organic parsley plucked from the garden while it was still photosynthesising, and sort of tasteless pesto (I think they left out the parmesan).

About fifteen of us sat in the shade around a big old timber table chatting.

Then it happened: a hippie with a big bushy beard and an offensive rainbow headband started giving massages. They were just neck and shoulder massages, from what I could tell, so when he moved behind me, placed his hands on my shoulders and took a deep, cleansing breath, I didn’t stop him.

He worked my neck and shoulder muscles with firm hands, and he was actually pretty good. I felt myself relaxing under his touch (I’m a total sucker for massage), and then he did something that I am still a little shocked about, years later.

He moved his hands down my back, all the way to the top of my butt crack. In one swift movement, he did some sort of twisty hand thing, as if he was untying a big knot that was sitting just above my bum, and announced in a loud voice so that everyone around the table could hear:

“There you go honey, I just released your sexual guilt.”

And with that, he wandered off to find his glass of red wine.

The table momentarily stopped talking, stared at me a minute, and went back to their conversations.

Sexual guilt? WTF? I wish I’d had the guts to tell that guy to shove his sexual guilt up his arse, but I was too embarrassed and didn’t want to draw any more attention to myself.

Had I had the guts to tell him off, this is what I would have said:

Number 1: Listen here mister man, I don’t have any sexual guilt so you have no idea what you are talking about.

Number 2: Even if I DID have any sexual guilt, why do you think it would be hiding down there near my bum? Wouldn’t it be in my, you know, brain?

Number 3: What the hell do you mean by ‘sexual guilt’ anyway? It’s kind of a random thing to say to a stranger.

Number 4: Imagining for a moment I do have sexual guilt, perhaps I wanted it to stay exactly where it was. Maybe I enjoyed walking around with sexual guilt blocking up my bum chakra.

Number 5: Next time you decide to release anything other than your own arrogance, or that headband, try asking permission. Had you done that, I would have given you a long list of my ACTUAL problems, which would have been far more useful for you to release.

8 thoughts on “I just ‘released’ your sexual guilt”