I have a friend from Byron Bay (OK he’s my ex). He’s a total hippie with hair down to his bum (jealous). He’s also a psychologist, so I figured he’d be a good person to ask about getting involved with hippie guys in my town. Or, any guys in my town. Not for me of course, but for my gorgeous single friends (any takers?).

Specifically, I asked him to list some red flags the ladies should watch out for. Here’s what he wrote.

Anthony: “I really don’t think I have anything to offer, other than trying to remember a few old tired Pia Mellody concepts. But I thought I’d offer a few of the warning signals women ignore: 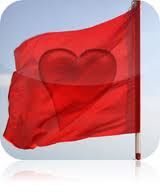 Thanks for the heads-up Anth!

4 thoughts on “The best relationships red flag list ever”