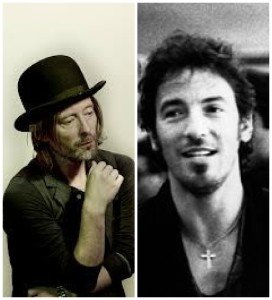 I don’t go to church. For me, a good rock concert is more of a spiritual experience than church.

The last time I set foot in a church was when I was about 15 and finishing Year 10 at my Catholic High School. I was glad to see the back of those boring, drawn-out Masses, to be honest.

I was baptised a Catholic as a baby, so I didn’t get much say in it. I wasn’t one of those babies who pissed on the priest, but it didn’t take me long to begin questioning things, say at around five years of age.

I went to three Catholic primary schools and one Catholic high school. There were things I liked about going to Mass. I found the whole premise of the religion completely confusing and disturbing, but I actually enjoyed aspects of being a Catholic. Such as being able to go to Confession and tell the priest all my ‘sins’, then have him forgive me. Just like that.

I remember walking out of there feeling on top of the world. Squeaky clean and ready to continue sinning.

While I always felt the Bible was mostly made up and quite macabre in a lot of places, I made the most of having to go to Mass every Sunday. When our family moved to Katoomba in 1982, I was amazed to discover Saint Canice’s church accepted girls as altar servers. Very progressive.

If I had to be sitting in that church for an hour of my life every Sunday, I wanted to be doing something constructive. So I became an altar server along with my brother. Our tasks were to light the candles, get the Bibles ready for the priest, fill the chalice with wine and the other chalice with ‘the body of Christ’, and sit to the side of the altar during the Mass, getting stuff for the priest when he needed it.

There were long stretches between jobs during the Mass, where my brother and I sat holding white candles in our white robes to the side of the altar, in full view of the congregation. We entertained ourselves by pouring hot candle wax on each other’s hands.

It was fun, in a sort of sadistic way.

The one spiritual experience I got from Mass was the part at the end when everyone shook hands and said, “Peace be with you.” “And also with you.” It was partial elation that the Mass was nearly over, but also the feeling of true benevolent connection with other human beings that lifted my heart and soul.

That kind of mass connection with other human beings on a large scale has mostly happened for me at major music events. Because I’ve always been into rock music, it has mostly been at rock concerts, but it has also happened at operas, symphonies and other events where the audience becomes united with the musicians and you can feel a palpable sense of connection to the entire universe – or at least something greater than yourself — through the music.

It is a true spiritual experience.

I have had that experience twice now in the past four months. In November last year, it happened at the Radiohead concert at Brisbane Entertainment Centre. I read newspaper articles by journalists saying they ‘saw God’ at that concert.

I did too. And I don’t even believe in God, in the traditional sense. I felt something even greater than God at that concert, and I was totally peaking and operating on some sort of higher plane for weeks afterwards.

The second one was last Saturday night at the Bruce Springsteen concert at the same venue. That took me by surprise, since I’ve never been a Bruce fan. I went with my partner, Herrin and his mum. Herrin has long been a fan and we took him for his birthday. It was a three-hour set with no breaks and I only knew four songs: Down to the River, Blinded by the Light, Born to Run and Dancing in the Dark. I was so hoping he would play Because the Night, which he wrote and Patti Smith made her own.

Despite not knowing most of the songs, I was deeply moved by the way Bruce baby connected with the audience.

It was a 12,000 capacity crowd. Throughout the show, Bruce walked out into the crowd and touched people. No, not like that. He touched them emotionally, spiritually. And the elation on people’s faces was so uplifting. Seeing their hands pat his back as he moved past them brought a tear to my eye. Seeing a moving bed of arms hold him up as he crowd surfed his way back to the stage made me smile.

It made me wonder why every rock star, every rock band, does not connect with the audience in this way. They are missing such a great opportunity.

Herrin made the comment that it wouldn’t suit every band to do this. For example, if at a Pink Floyd concert, Roger Waters or Dave Gilmour went running out into the crowd to give everyone high-fives, it would just be weird. They, like Radiohead, connect with people by tapping deeply into the collective sense of alienation many people feel in life, and doing it in such a highly artistic way it becomes transcendental. They do it in a way that relieves the alienation and connects people.

Something else I loved about Bruce’s show was when he got an 11-year-old boy up on stage who was wearing the outfit from the Born in the USA cover: the white T-shirt, the jeans, the red handkerchief in the back pocket. He handed the kid the microphone and the kid sang to the crowd with such jubilation that we all felt it. Then Bruce took him by the hand and they did a big stage slide together. The applause was deafening.

That kid will never forget that experience as long as he lives. None of us will forget the experience of being united with 12,000 people enjoying the music of a working class folk rock singer-songwriter who has never forgotten where he came from. Never forgotten what’s important in life. Connection with people on a heart and soul level, showing your humanness even when you are one of the world’s greatest rock stars. Showing people they are just like you.

That to me, rather than priests on pulpits in robes, is what being truly spiritual is all about.

16 thoughts on “When rock concerts are a spiritual experience”