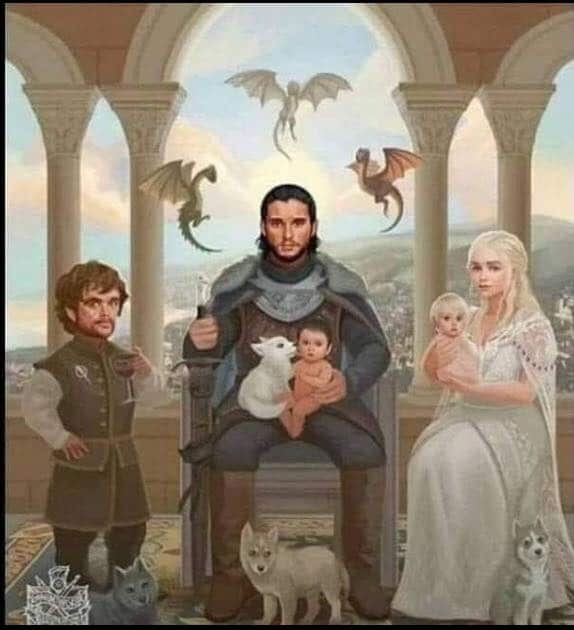 I’ve spent most of the day reflecting on the Game of Thrones finale last night. I feel conflicted, because on one hand I am supremely grateful to the brilliant David Benioff and D.B. Weiss who adapted the TV series from George R. R. Martin’s A Song of Ice and Fire, into the most epic TV show the world has ever seen.

On the other hand, I feel empty. Flat. Disappointed. And I’m not alone.

As I write, a change.org petition has attracted almost 1.4 million signatures campaigning to have season 8 made with ‘competent writers’.

Dudes. I think it’s pretty clear D.B. Weiss and David Benioff are competent writers. Even George R.R. Martin thinks so. But I see where you’re coming from. This season left a lot to be desired. After watching the show religiously for the past eight years, we felt we deserved more.

For one, it was awesome but a little strange that Arya Stark was able to take the Night King down so easily with a tiny little knife. There. Done. Didn’t need dragons for that after all.

Secondly, let’s talk about THAT finale. I’m super-stoked for Sansa. She deserved to become Queen of the North. No gripes there. Also stoked for Arya becoming Dora the Explorer.

But Dany’s death? C’mon! This is the chick we have followed, cheered on, cried with, clapped for, envying the shit out of her hair, for EIGHT years. There’s no doubt she completely lost it when she burnt King’s Landing to the ground and what she did was unforgivable.

But – the girl was mad. As in angry – not crazy. She had been fucked over so many times, from way back when she was a girl being traded like a horse to the Dothraki leader Khal Drogo (who turned out to be so hot she was cool with it in the end), to her hideous brother’s abuse, to having one of her dragons turned into a zombie and the other one shot down, to losing the lovely Ser Jorah…the list goes on.

Dany was a fighter and she was determined as hell to get to the Iron Throne. As she said, she DID give Cersei Lannister a chance to surrender and Cersei responded by chopping her best friend’s head off. Not cool. What did Cersei expect after that?

But – and this is a big BUT. Dany made the fatal mistake of thinking she was The Good Guys, when it was clear to everyone from Arya to Sansa to Lord Varys, that she had gone rogue. It took Jon a wee while to realise it – he was totally blinded by love – but it was obvious Dany had become The Bad Guys. History is rife with stories of people who think they’re the good guys, when they’re really the bad guys.

Dany had to go and who better to take her down than Jon Snow, while he was giving her an awesome pash that she’d been waiting ages for. But it was all over so… fast. Just like that. Almost a decade of our lives cheering for this woman, then a little stab in the heart and it’s all over. No cough, splutter, please don’t let me die, final last words. Nothing. As the great Jon Bon Jovi once said, shot through the heart, and you’re to blame, baby you give love, a bad name.

It was almost as disappointing as Cersei Lannister’s rather poetic death in the arms of her twin brother and lover Jamie, buried under the rubble together, as if they’d returned to a rocky womb. Cersei was under no illusions. She knew she was The Bad Guys. She owned that shit, right to the end. And most of us would have preferred to see her die a horrible death at the hands of someone who wanted sweet revenge.

Man – Game of Thrones has sure turned us into a bloodthirsty lot hasn’t it?

Finally, let’s talk about Bran. Creepy Bran. DID NOT DESERVE TO BE MADE KING. Sure, he’s got powers and holds the history of the world and manipulated the shit out of everyone from his wheelchair, but he himself said he didn’t have any ‘wants’ anymore. Then when Tyrion volunteered him to be king, he’s all, ‘okay cool, I’ll be king, why do you think I came all this way?’.

Sorry Bran, way above your pay grade mate. Jon Snow should have at least been offered the opportunity first. He was the show’s true hero and he did nothing but bust his arse being a good guy, oozing integrity from every cell of his being from the start to the finish.

It was devastating to see him banished to Castle Black, riding in all depressed and lonely, back to where he began. The only saving grace was his reunion with Ghost, his wolf. Jon Snow – you were ripped off mate. I hope you go and hook up with a really hot Wildling and have lots of Wildling babies and live happily ever after.

PS: I’ve used this image of an alternative Game of Thrones ending because I believe in forgiveness and redemption and I’m a romantic at heart. Plus, baby dragons, baby wolves and Tyrion with a glass of red – perfect. It’s a fairytale ending, but then, GoT was no fairytale so I’m just dreamin’. I found this image on a GoT meme site and I can’t track down who created it but happy to credit them when I do.