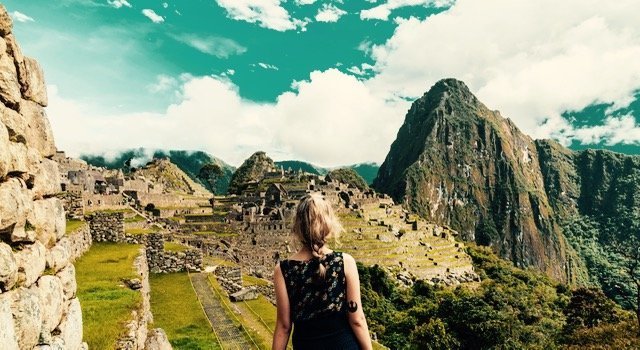 Scholars have debated the mysteries of Machu Picchu, the Lost City of the Incas for more than a century, but a startling discovery has shed new light on the construction methods used to build the city, which the ancient Incas began constructing at 8,000 feet above sea level, atop the jagged green peaks of the Andes cordillera in Peru, around 1400AD.

Like Britain’s Stonehenge, the monoliths used to construct the city came from miles away, and until now, it was not known how the Incas were able to transport the boulders without the use of modern technology, and haul them up the sides of enormous mountains – particularly as, judging from the sizes of the doorways at various Inca ruins, the ancient Incas were diminutive in stature.

One theory was that the Inca’s slaves, the Quechua and Aymara people, consumed vast quantities of the hallucinogenic cactus known as San Pedro, and simply sat around hallucinating the rocks into existence, plopping them into place like a giant 3-D puzzle as they drank coca leaf tea and played El Condor Pasa on their pan pipes.

As credible as that theory first appeared, new discoveries made at an excavation site in the eastern corner of Machu Picchu have uncovered a rare kind of naturally ‘bionic’ dung beetle that could shift boulders as effortlessly as if they were tiny pieces of poo.

A further theory put forth by a stoned backpacker and verified later by cocaine-addicted archaeologists, is that the bionic dung beetles possessed a kind of suicide gene that prompted them to drop the boulder on top of themselves once the job was done, thus crushing themselves to death and allowing their crunchy little bodies to become the mortar that held Machu Picchu together.

In a strange twist to these revelations, the multinational producer of agricultural chemicals, Monsanto, has now patented the ancient dung beetle suicide gene with the aim of cloning its DNA and transplanting it into anti-GM protestors. The experiment is designed to test whether the ancient Peruvian bionic dung beetle suicide gene would prompt the protestors to crush themselves to death under the weight of their own convictions.

If successful, Monsanto would campaign to have all of the world’s environmentalists genetically modified with the dung beetle suicide gene, for the protection of those in favour of seeing one company monopolise global agriculture and put an end to organic food production as we know it.

A spokesperson from Monsanto said he was delighted to have won the patent and is thrilled to add it to the company’s portfolio of suicide genes, ensuring Monsanto’s total domination over global food supplies.

Meanwhile, Inca descendants are angry with the Monsanto officials traipsing around what they now are claiming is a sacred burial site. They are demanding Machu Picchu be declared a UN World Heritage Site to protect it from further exploitation.

In response, Monsanto has said, “DER! Most people except the stupid Peruvians seem to know Machu Picchu is already a World Heritage Site, but regardless, silly things like laws have never stopped multinational corporations on their rape, pillage and plunder of the earth before. Our motto is profits before people, not the other way around!”

Said Hauntenepec: “The ancient bionic dung beetle represents the kind of work-yourself-to-death-for-no-money-or-glory attitude that we need to engender in our people if they are going to have any chance of survival in today’s world of economic uncertainty.”

You can buy my memoir You Had Me at Hola: In search of love & truth in South America here on my website or at Amazon, Booktopia, Barnes & Noble, Foyles, Waterstones and Book Depository. Read the reviews here at Goodreads.