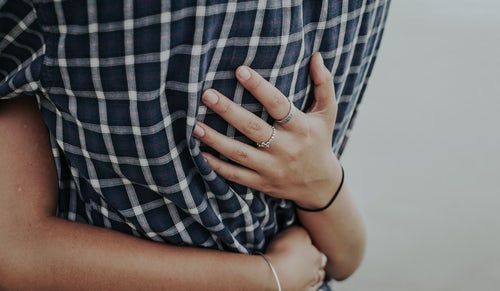 A close friend has informed me I’m not much of a hugger. I had no idea there was anything untoward going on with my hugs, until she pointed out that whenever she tries to hug me, I squirm away from her.

I wasn’t offended or hurt. I was genuinely curious: am I bad at something without realising it? Am I a failure at hugging? I don’t think so.

This friend loves a hug. She’s one of those people who savours the hug, feels into it, is fully present and in the moment with the hug. I reckon she’d be happy if the average hug time exceeded two minutes.

My average hug time is about two seconds (one second short of the standard three seconds). It’s not that I dislike hugging, or that I’m grossed out by germs, bad breath, chai breath, the scent of sandalwood or plain old BO. I’m just impatient. I like to move on to more interesting things as quickly as possible.

What could be more interesting than a hug, I hear you ask?

When I first came to Maleny I thought I had to hug and kiss everyone, every time I passed them in the street. I came from Sydney, where it was normal to have a quick peck on the cheek, but extended hugs seemed like the done thing in Maleny and I didn’t want hippies to judge me for not hugging enough. I hugged and kissed everyone from close friends to acquaintances to people I barely knew.

There was even a Hug Patrol in Maleny for a while. Led by a local lady called Arcadia Love, they’d patrol the streets at the Christmas carnivale and other events, wearing official Hug Patrol T-shirts, and hug random people. It was highly popular and never failed to get people smiling and laughing. I think I hugged the Hug Patrol troops once or twice, but I never joined them. I wouldn’t have been cut out for the job. Customer dissatisfaction would have soared.

At some point, in the past 14 years, I stopped over-hugging and now I’ve swung the other way, and I’m comfortable with that. I reserve my best hugs for my husband and two sons. My sons are huge over-huggers, but they’ve been raised in Maleny, so yeah.

Hugging your own child is different to hugging random ferals and hippies. It calls to mind the wise saying: children are like farts – you don’t mind your own, but you can’t stand anyone else’s. I’m almost always up for a hug with my boys. They’ve grown up smothered in hugs and kisses and now they smother each other in hugs and kisses. That is so beautiful to see between two boys.

As for my husband Herrin, he’s an ex-hippie and sometimes tells me my hugs are pathetic. Often when he tries to hug me, my mind is elsewhere and I stand there with limp arms and vacant eyes, not even realising I’m in the midst of a hug.

The word ‘hug’ is believed to come from the word ‘hugga’, meaning ‘to comfort’ in the Old Norse language, first appearing 450 years ago in Scandinavia. I don’t know how popular hugging is in Scandinavia these days, but it’s still pretty popular in Maleny. The history books say hugging only became a mainstream practice 50 years ago and I would say Maleny has made full use of those 50 years.

And thank GODDESS (that’s what people say in Maleny instead of thank God). Hugging is so good for us – it reduces blood pressure and increases oxytocin, the ‘trust’ hormone. It makes you feel all warm and fuzzy when you hug someone you love, or even just like.

The danger with hugging hippies is that 27-minute hugs tend to cut into your day. Sometimes they get you in their grip and won’t let go and you have no choice but to hug back while trying to avoid the whiff of BO from a hairy underarm.

There’s another danger, too. Sometimes the hugger will also go in for a sloppy kiss. There’s one guy who likes to prepare his lips by running his tongue over them a few times until they’re nice and moist with saliva, before planting a smacker right on your lips. If you try to turn your head slightly, his lips will follow until he plants them right on yours. There’s no escaping it.

When I lived in South America, they gave you one, two or three kisses on the cheek as a greeting, depending what country you were in. I didn’t mind that because it was over with quickly and there was no eye contact. Perfecto.

Personally, I prefer the air kiss. It’s more hygienic. I don’t know who invented the air kiss, but they deserve a medal. You don’t get germs, there’s no confusion about how long it should last, your lipstick stays put and everyone’s happy.

But back to the business of hugging. If you Google ‘hugging’, you’ll find lists that analyse all the hugs. I’ve compiled a special hippie hug list, curated from personal experience. Feel free to add your own in the comments section at the end of the post:

Have I given you the impression I’m a little finicky? I’m really not, not compared to my friend who turns her head 360 degrees like Linda Blair to avoid people kissing her on the cheek when she hugs. We are all grossed out by different things, so I’m not going to feel ashamed of my hugging reputation.

Hugging is beautiful. It is a natural, normal part of life. The world would be a sad place without hugs. They are, however, undeniably awkward at times. So be warned: if you want a hug from me, I will happily oblige, as long as it’s a quickie.

1 thought on “We need to talk about hugging”